A Remedy for Mistakes at Oral Argument

We all hope we never make mistakes at oral argument and likely practice many hours to ensure we've thought of every possible question the court may throw our way. But what happens when a mistake is made, or a question is misunderstood? And this is only realized after the conclusion of the argument?

This recently happened to seasoned attorney (but first time Supreme Court presenter), Richard Griffin, Jr., senior counsel for the National Labor Relations Board, in a trio of consolidated cases regarding the question of whether prohibiting class action suits violate federal labor law. Griffin argued that an employer cannot make as a condition of employment the waiver of this right to bring a class action suit. Chief Justice Roberts asked Griffin a hypothetical, and Griffin, misunderstanding the question, gave an answer that he later regretted. His fellow counsel then later apparently contradicted the position. Here is some of the exchange:

Griffin: "That's a rule of the arbitral forum, and the employee takes the rules of the forum as they find them."

Roberts: "So you have a right to act collectively but only if there are 51 or more of you?"

Griffin: "What—no,  your honor. What you have an opportunity to do is to try and utilize the rules that are available in the forum without the employer intervening through a prohibition that's violative of Section 7.”

Justice Anthony Kennedy: "No, the hypothetical—and the chief can protect his own question—the hypothetical is the contract says you have to have 50."

What followed was Roberts's attempt to clarify the hypothetical and Griffin ultimately agreeing that if the employment agreement says an employee shall arbitrate in a particular arbitral forum that limits collective arbitration to 51 or more persons, that would be OK. When Roberts pressed the same hypothetical on [fellow counsel] Ortiz, the law professor said the employer could not insist on an agreement where the arbitral forum limited collective actions to more than 50 people.

Ortiz said there was never a difference of opinion between him and Griffin but just how they understood the question, which even Roberts acknowledged was confusing. "Dick thought the chief was assuming something when he wasn't," Ortiz said. "I assumed when the chief was asking it, he wasn't predisposed in our case."

Ortiz continued, "If you had answered the way Dick did to the way the chief justice was actually asking it, you were basically giving up the right to file collective, joint actions for any number between two and 50. You were saying regardless of what alternative forums existed, the employer could bind the employee to the rules of the forum and they could do the bad work rather than the employment agreement."

Ortiz told Griffin it was not his fault for the confusion. "Dick feels just terrible about this," he said. "His term is up at the end of this month and well, he just feels terrible."

To follow up, Griffin did what others lawyers have done in the past - he sent a letter to the Clerk acknowledging the mistake and seeking to enter the corrected information into the record. Former Clerk of Court, William Suter, said that in the rare cases when this has happened in the past, the letter is forwarded to the justices and placed in the permanent case file, but no transcripts are changed. 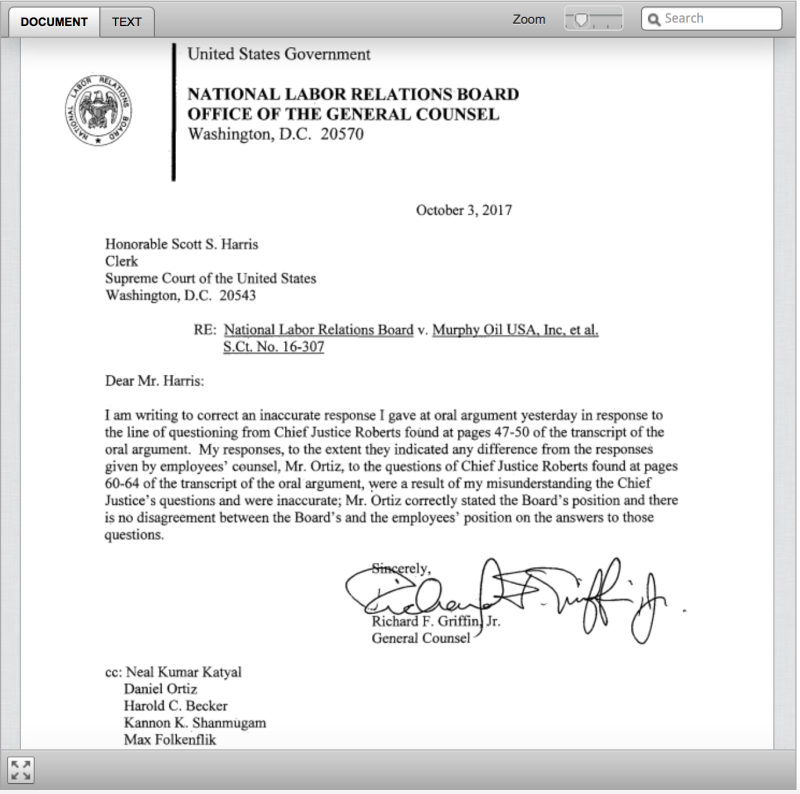 So while we hope this will never happen to us, there is little guarantee that we will never make mistakes. On the occasion that we do, the recommendation to correct the record is to do exactly this.

In a footnote in his law review article on oral argument in the Supreme Court, Mayer Brown's Stephen Shapiro said that on "rare occasions," a lawyer might realize after arguments that he or she made an "improvident concession" on a major point. In that situation, he said, counsel should send a "concise letter" to the justices through the clerk, with 10 extra copies, referring to the question and clarifying the response.

"Needless to say, there is no assurance that the justices will honor this kind of retraction," he wrote.

Another example of an attempt to correct the record can be seen in a 2014 case before the Ninth Circuit Court of Appeals. Counsel for the Department of Justice misspoke and sought to ensure the correction of the mistake was brought to the attention of the court. While it can be humbling to point out our mistakes, ethically it is certainly the right thing to do. An intentional misstatement is never ok, but correcting an errant mistake that could hurt the case is still the ethical action to take. It may be humbling, but the effect in the long run is that the principle of candor before the court is strengthened, and too, respect for the justice system grows - an essential factor for a fair and free society.