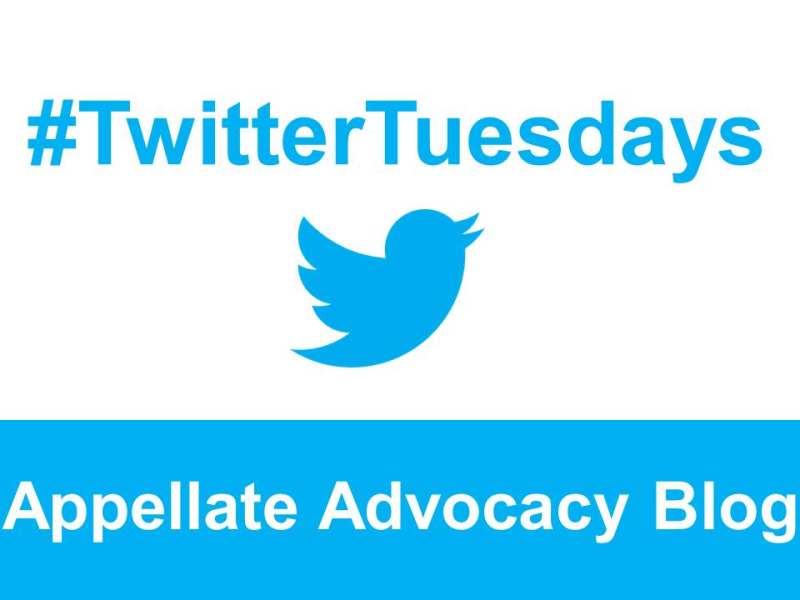 Last week my heart broke as I saw the flooding and devastation in Houston.  At the same time, however, I was heartened by how the Houston community and the country rallied around those in need.  Today's #TwitterTuesday features some #HoustonStrong appellate accounts to follow:

April Farris (@farris_april)--April is an appellate practitioner in Texas.  While she has lived and practiced in several parts of the state, she is currently in Houston.  She is very involved in the State Bar of Texas Appellate Section and was recently recognized by Thomson Reuters's Super Lawyers as a 2017 "Rising Star."

Raffi Melkonian (@RMFifthCircuit)--Raffi is an appellate practitioner in Houston with Wright & Close LLP, with a focus on the Fifth Circuit.  He is an avid member of #appellatetwitter.

Josh Blackman (@JoshMBlackman)--Josh teaches constitutional law at South Texas College of Law Houston.  He is an avid tweeter and blogger on the Supreme Court, and he is the creator of one of my favorite tools--Fantasy SCOTUS.

Finally, although not appellate law related, I wanted to give a #TwitterTuesday shout-out to Gallery Furniture (@GFToday) and Mattress Mack (@MattressMack). Jim "Mattress Mack" McIngvale is the founder of Gallery Furniture.  As flood water ravaged the city of Houston, he opened his two furniture warehouses to serve as shelters for those in need.  Thank you Mattress Mack for your generosity!