Oral arguments in Riley v. California and United States v. Wurie have revived the discussion about the future of cellphone searches by law enforcement. Amy Howe over at SCOTUSblog has an excellent plain English summary of the arguments. 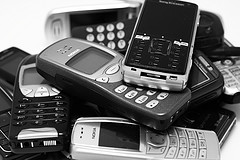 In a pair of posts last fall (here and here), I discussed examining the issue with my Advanced Appellate Advocacy class. These cases present a question of when law enforcement may search a cellphone seized at the time of arrest without seeking a warrant. I noted then that one way to conceptualize the debate is to attempt to categorize the cellphone as either an "item associated with the arrestee" (which may be freely searched) or merely an "item within the arrestee's control" (which may be searched only with some justification). The government in these cases, particularly Wurie, seemed to employ a bright-line classification argument. That is, the government proposed that a cellphone in the possession of an arrestee should be classified as an "item immediately associated with the arrestee," similar to a wallet or pager, and, therefore, subject to search without limitation. The litigation history at that time suggested the government pushed hard for this classification with very little attention devoted to a fallback or alternative argument. This was in contrast to the defense approach, again, particularaly in Wurie's appellate briefing, of providing alternative arguments for rejecting cellphone searches.

The recap at SCOTUSblog suggests that the Justices did not seem inclined to credit either party's categorical classification argument. Instead, they seemed to be searching for a logical way to draw a line between a permissible and impermissible search. As Howe explains:

Given the lack of support for either bright-line rule, it comes as no surprise that the Justices spent a good chunk of the two hours today mulling over a possible middle ground.  But here too there wasn’t much in the way of consensus, as the Court struggled to find a compromise that would genuinely protect privacy.

While the pull of a strict categorical approach is strong, (it was especially strong for my students as new advocates), judges concerned with practical application and balancing the interests often seek out some middle ground. This is even more true in areas of the law concerned with balancing interests, such as the Fourth Amendment's reasonable search arena. Ultimately, the Court in Riley and Wurie will have to find that consensus position, even if it did not find it among the advocates' arguments yesterday.