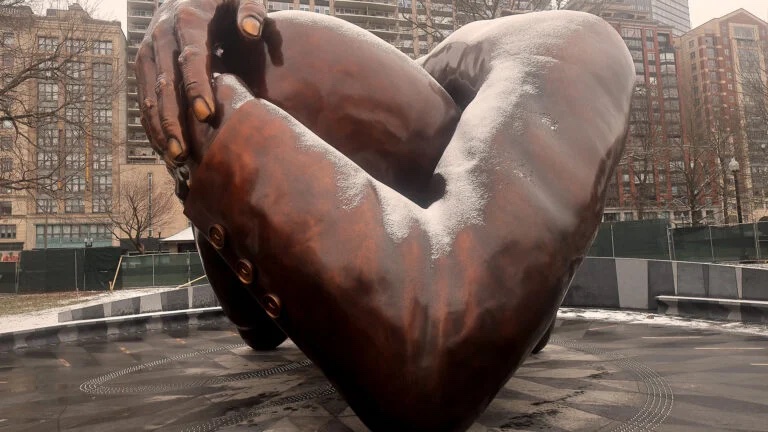 This is a new piece of amazing public art that was unveiled in the Boston Common last week. I am very lucky that it is across the street from my law school. It depicts the hug between Martin Luther King Jr. and his wife Coretta Scott King after he won the Nobel Peace Prize in 1964. I have seen numerous photos of this sculpture (called The Embrace), but this one is my favorite because in this photo, you can see the heart shape most clearly.  The scale of this work is giant (a person can stand under the hands on the other side), as befits the scale of Martin Luther King, Jr.'s work.

I am thrilled that Boston has embraced Martin Luther King, Jr. He lived in Boston, met his wife at Boston University and lived here for years while completing his Ph.D.  Did we embrace him at that point in his career? I doubt it. Despite being in the bluest of blue states, we were one of the last cities in the United States to desegregate public schools. It wasn't pretty when it happened in 1974 (yes, 20 years after Brown v. Board of Ed!!!). And, to be very clear, one piece of public art doesn't fix a lot of things, but it is a statement that here in Boston, we agree with Martin Luther King, Jr. who said (in 1967), "I have decided to stick with love. Hate is too great a burden to bear."

Let's take a moment to embrace that.

On this day in particular, many of us are looking into the vortex of beginning a new semester and the challenges and stress that come with it. So as we move forward into the maelstrom, let us embrace the tasks, our students, and each other.