It's OK for Some Schools, But Not Yours

Like all mornings, an email from the Chronicle of Higher Education landed in my Inbox today.  One of its articles bore the following picture: 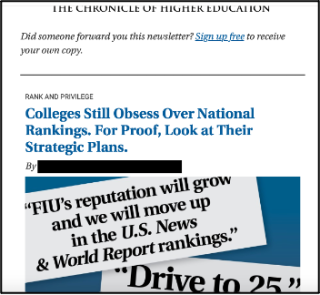 Immediately, I noticed something troubling:  Unlike the other three quotes (not pictured), the visual specifically named only FIU.  Thus, out of the thousands of schools around the nation that for decades have pursued USNWR rankings, this picture chose to call out and specifically name only a school enrolling a majority of students who are nonwhite.*  In fact, several of the schools discussed in the article are those where a plurality of students are People of Color.  To make matters worse, above their article that implicitly chastises a school serving mostly students who are nonwhite, the authors affixed the heading “Privilege.”

Really digest that for a second:  The heading “Privilege” above the name of the only singled-out school, the majority of whose students are nonwhite.

Apparently, when such schools use the exact same methods as less diverse schools to improve their students’ opportunities, the method is derided as out-of-line.  And, while the article raises important issues about rankings, the choice to address those issues in this way is deeply problematic.

But today's example is just one instance of the biases, insults, and micro-(and not so micro) aggressions many of our students constantly experience:  The insinuations that their successes are somehow artificial; the assumption that they are “less well-prepared for law school” than their peers at other schools (despite their 159/160 LSAT median and 3.69 UGPA median); off-hand comments by academics specifically noting their race; my colleague Raul Ruiz being introduced at a conference as “Paul ROO-izz” and without the “professor” title accorded to other panelists.  And, today, FIU's movement in the rankings is deemed nefarious while majority- or plurality-white schools garner praise for their genius.

In making these observations, I have to acknowledge my own white-male privilege.  My career path did not include the obstacles facing many of my students, obstacles instantiated by the brazen biases signaled by the headline above.  But I sincerely hope that I am correct in believing that this privilege should not preclude me from loudly objecting to the conditions that impede my students’ success.

Because in law school academic support, that is precisely what we do.  Let’s do it loudly.

*  I purposely omit the term “minority-majority school.”  As detailed abundantly, many note that the term frustrates the goals of equality.