Why Ted Lasso is a great model of being ASP-ish

In our world of Academic Support and Bar Prep, we often say that someone is “Asp-ish” when we want to compliment one of our own.  Someone is ASP-ish if  they are  collaborative, supportive, and embrace things like growth mindset. Someone who is ASP-ish shares ideas, hesitates to take sole credit, is rarely ego driven, and thinks of themselves as a part of a team, not a solo player.

There is a relatively new show put out by AppleTv, “Ted Lasso”, about an American Football Coach from Kansas (Jason Sudeikis) who is hired to coach an English Premier League Football Team, AFC Richmond. He has never been to England and never played English Football, so that’s where the shenanigans begin. 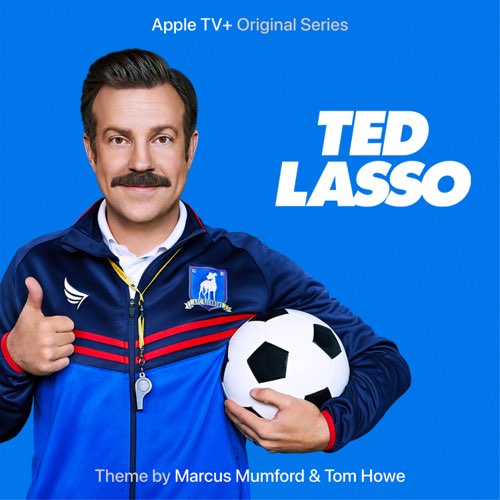 While watching this with my very British husband, it occurred to me even though Ted is a football coach (and a football coach!)  if he made a career change and started teaching Academic Support at a law school, we would definitely embrace him, and say he was very ASP-ish. Not only that, I think we can learn some lessons from him! In fact, I’m not the only one, you can find multiple articles from various fields about things we can learn from Ted about management and leadership.

Also, I tried to keep this spoiler free, but couldn’t do it. So, read at your own risk! Spoilers below! (And if you haven't seen it, go watch now, as it's a great way to relieve stress, and you probably need that)

Ted leads with collaboration and team work, something that we can all agree is at the heart of ASP. In fact, one of the first things he does is push his desk up against the desk of his assistant coach, the aptly named Coach Beard. This is presumably done so they can talk more and collaborate more effectively. He also listens to those that have more expertise than he does. In the beginning, he even lacks the correct vocabulary, but happily lets Coach Beard correct him and teach him.

Moreover, he doesn’t let hierarchy get in the way of good ideas. He meets Nathan, a “lowly” kit boy, who it seems is in charge of things like laundry and pitch maintenance. Despite Nathan’s lack of any credentials, Ted is quick to not only show him respect, but ask for and value his opinion.

In fact, Ted’s major coaching philosophy seems to be to lift up and support those around him. One of my favorite lines is the team owner asking Ted “do you believe in ghosts, Ted?” and Ted responding “Hmm mm,  I do, but more importantly, I think they need to believe in themselves” This sort of sums up Ted’s entire personality. Not only does he ask for Nathan’s name, which is something Nathan seems shocked by when he says “no one has ever asked before”, but Ted is insistent that he is part of the team. When Nathan has an idea for a play, Ted encourages him and uses it. He also has no problem sharing credit, explaining to the local reporter, “Trent Crimm, The Independent” that the play was courtesy of Nathan. The reporter is a bit incredulous that a premier league coach would listen to a “kit boy”, but Ted is unphased. He knows that someone doesn’t need to have credentials to have good ideas, and he also knows that those with higher credentials need to give credit to and support those without. In fact, when facing a team that Richmond hadn’t beaten in 60 years he lets Nathan take over the pregame speech, and by this point, the entire team is embracing Nathan’s ideas.  Finally, in the very last episode, Ted makes sure Nathan is promoted to Coach! This is something our entire community does well – lift each other up and share credit! 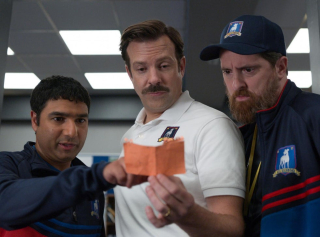 It’s also clear that Ted is all about Growth Mindset, Resilience and Grit. When we first meet Ted, he is on a plane, on his way to London, and a kid comes up to him, excited to meet him. The kid can’t believe what Ted is about to do, and says “You're mental mate, they’re going to murder you.” in reference to coaching a team for a sport he has never played. Ted’s only response is “Yea, I’ve heard that before, but here I am, still dancing.” I love this mindset, and can only hope to learn how to keep dancing from Ted.  There is also a great thruway line in the first episode, when Ted is learning the terminology of English Football “I’m going to get it though, because training makes perfect.”  Finally, at one point, after a frustrating day, he says  “I’m not sure what y’all’s smallest unit of measurement is, but that’s how much headway I made”. The response of the owner is just “and yet you remain undeterred”, which is often how we must all approach academic support. We often feel like we make no headway, yet must keep no dancing.

The overreaching arc of Ted is that growing as individuals, and as a team, is more important than the score. “For me success is not about the wins or losses, it’s about helping these young fellas be the best versions of themselves, on or off the field.”

First, he recognizes that players need to be supported to be their best. He recognizes that one player, who is new to England from Nigeria, isn’t playing his best because he’s a bit homesick and adjusting. His solution is not to tell him to suck it up or be an adult, but rather to throw him a birthday celebration and create a care package that includes food from Nigeria. Also, instead of immediately talking to players about training, or game strategy, he asks them to put suggestions in a box, and assures them it can be things like water pressure or snacks.. And in fact, he immediately fixes the subpar water pressure, which seems to be a problem the team has dealt with for some time. He recognizes that these things might be small, but the players need to feel listened to and heard. He also genuinely wants to know everyone’s story.  Similarly, I think we often lead the charge in listening to our students needs, even If they are minor.

When he does have to correct players, he doesn’t yell or mock, he is kind. He leads with warmth and understanding, and positive reinforcement. In fact, in one episode, his captain, an aging super star, had a particularly bad game where mistakes were made.  The captain, Roy, says “Can you just tell me I F***ed up and go?” and Ted says he’s not going to do that, and he doesn’t want to hear the self pity. He also encourages him to go easy on himself. 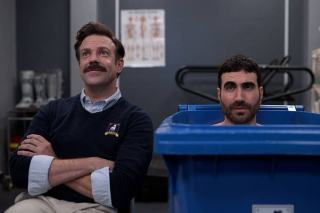 Ted listening to Captain Roy Kent, and not allowing him to beat himself up after a bad game

He also uses his team leaders to encourage other players, much the way we might use peer tutors, or recent alumnae to encourage bar takers. He notices that a couple younger players are constantly picking on Nathan. Instead of yelling at the players himself, which is recognizes could make the situation worse, he makes his Captain, Roy, do it. However, he leads Roy to this conclusion, which makes the lesson stick for both Roy, and the players giving Nathan a hard time.  I think we often look for ways to encourage our students to come up with answers themselves, for this exact reason.

Finally, Ted Lasso bakes. Anyone who has been around me in person knows that I can’t relate to bribing co-workers and students with baked goods.

However, it’s not all warm and fuzzy. Ted, despite being mostly a ray of positivity, is still human, just like us. He has real problems, and in one scene is depicted going through a very realistic panic attack. Moreover, there is one episode, near the end, where Ted doubles down on how he doesn’t measure success by wins and losses. In a rare show of anger, Coach Beard, screams that of COURSE wins and losses matter. He reminds Ted that these are professional athletes, not children, and wins and losses matter for their career and livelihood.

Similarly, I think we all find this balance between growth and grades a bit difficult. We want to reassure our students that grades don’t matter, because it’s the learning that’s important. But we know better. Grades matter for job prospects, and passing the bar is important for job prospects. Especially when dealing with first generation and underrepresented students who may have few or no connections,  and need to rely on their performance, of COURSE it matters. Maybe it shouldn't, but that's the current reality.

But, we can still teach and lead with kindness and compassion, and learn from Ted about how to be more ASP-ish. And if you are looking for a stress free tv binge, Ted Lasso has comedy, heart, romance, and some really well wounded and kick-butt female characters!