The Current State of the Bar Exam: It's NOT Great

Let’s talk about what’s been going on with the bar, and what our students have been dealing with. I would like to stress that these recent graduates will be the newest members of our profession. We owe it to them to care about their mental and physical well being.

First, back in March and April, there was uncertainty about the bar in general. Would it happen? Would it be postponed? While the class of 2020 was already dealing with moving classes online, dealing with non graduation, losing jobs they had already secured, now there is the uncertainty of the bar exam.

Sure, we were all dealing with uncertainty at that point, and still are. But I feel like this is different. This is going from looking forward to celebrating something you’ve worked so hard for, and potentially having your future figured out, to complete uncertainty.

In late April, and early May, states started announcing their decisions. Some were going to go ahead with July, some were postponing until the Fall. For those states that postponed, this meant students were now burdened with the stress of potentially changing housing plans, or figuring out how to finance their life (you know, a roof over their head and food to eat) for two extra months.

Added to that, some states like Rhode Island, didn’t even announce a decision until June! Leaving students wondering if there would be a bar exam to sit for, and if not where might they take the bar?

In the midst of all of this some states were restricting seats, leaving students to wonder if they would even get to take the bar exam. And oh right, the fees paid were non refundable. Because hundreds of dollars is nothing to a student, right?

Now, added to all of this is the fact that it’s almost July, Covid-19 is still spreading, and in most states the cases are rising. But some states plan to go ahead with the July exam. With hundreds of people in a testing site. And no guarantee that they can provide for safe accommodations. In fact, multiple states have said that masks will not be allowed while testing, and some states are requiring test takers to sign waivers.

Yes, we all had to take the bar, yes, it’s hard for everyone. But we didn’t have to deal with this. We didn't have to wonder if we'd contract a potentially deadly virus. (On a side note, yes, the young people can die from Covid, and not everyone taking the bar exam is young. On top of that, let's not forget that many of our bar takers might be at high risk, despite age)

Also, at least 3 states have announced that test takers must quarantine prior to taking the bar. While I appreciate this from a health and safety stand point, most bar takers can not afford to take stay in a hotel for 14 days. And, if they choose to not take the bar, they’re not getting a refund.

However, I think someone preparing for the bar, sums it up a bit better than I can.  (I have linked instead of sharing every tweet) 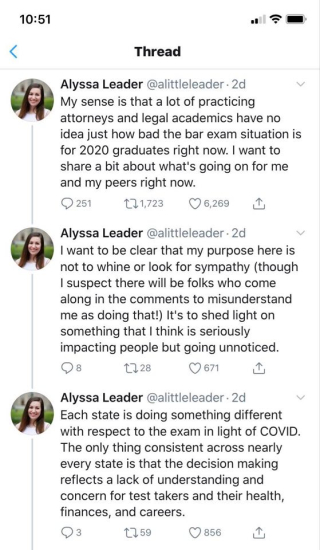 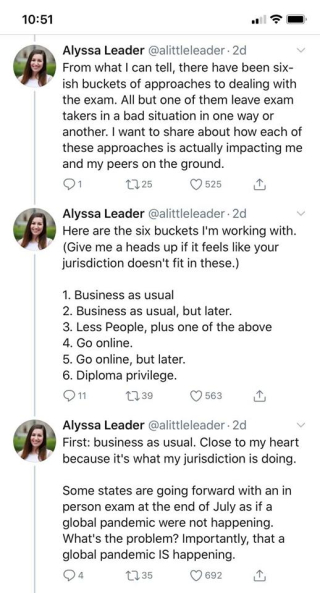 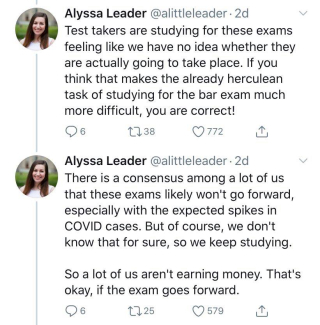 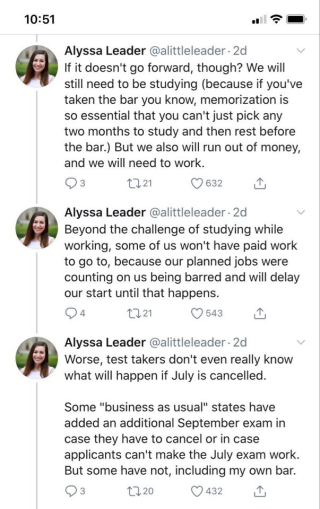 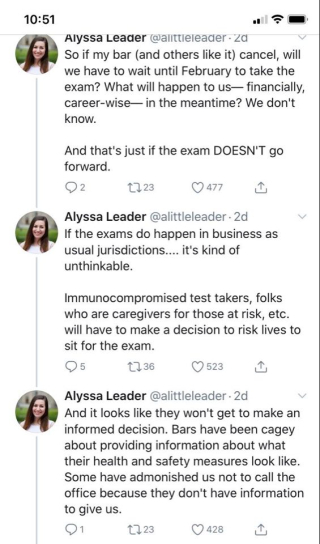 This is a really great and informative thread, that gives us insight into what students are going through. I haven't put every tweet here, because it's long. But please go to the link to read all of it.

There are so many attorneys out there with a “life was rough for me, so it should be for you too” attitude. They have literally told these students to suck it up and deal with it. But none of us, I promise,  have had to deal with this. This is much more than the usual stress that bar students are under, and we need to recognize that.

I’m at a loss, personally. I can’t imagine the stress that this class is under. There is nothing I can do individually but advocate for this class and support them. And I think, at the very least, we should all be supportive and empathetic, and understand that what we are asking of these bar takers is simply too much.