My inbox is crammed with pictures of pangolins. Pangolins with claws turned under walking on the ground, pangolins scaling trees, pangolin babies clinging to their mothers' backs and tails, pangolins held in the palm of a human hand, even pangolin skeletons in natural history displays.

For those of you quite as ignorant of this fascinating 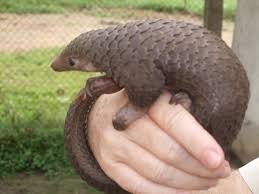 mammal as I was last week, the pangolins, also known as scaly anteaters, are the only mammals covered with sharp, protective keratin scales. The family consists of eight remaining species, four in Africa and four in Asia, some burrowing and some tree-dwelling. When threatened, they typically spray a foul substance (think of skunks) and roll into a tight protective ball like an oversized pine cone. Because pangolins typically produce only one offspring per year, don't fare well in captivity, and are extensively poached for their distinctive scales, they are among the most endangered species in the world.

So why is my inbox crammed with pangolin pictures? Because in my Academic Skills class, I want an early indication of who might need early intervention and who is already engaging in the practices of successful law students. Among my first assignments is explicitly requiring students to carefully read the syllabus. Stealing an idea from my colleague Rebekah Cudé, I embed into my syllabus a sentence telling students to send me a specific kind of picture. (Last year's platypuses were equally adorable.) When students don't send pictures in, it usually means: (a) they are not careful readers; (b) they aren't linked into a social network of information-sharing; or (c) they resist engaging in activities they feel are beneath them. Because careful, critical reading is so instrumental to success in law school and the practice of law, students who miss important information immediately garner my attention. Likewise, social isolation often foreshadows academic difficulty. Since I expect there will be some "buzz" and explicit sharing about the picture assignment, not sending a picture can be an early indication that certain students aren't linked into peer networks. Finally, I've found a correspondence between weak analysis and those who read but don't comply with directions; not complying can presage a student who easily identifies issues and spits out rules but considers the step-by-step process of careful legal analysis to be an unnecessary bother on the way to a foregone conclusion.

I also use the first weeks of the semester to give private feedback solely on the importance of following directions.  Complying with directions, of course, pays dividends whether one is answering the exact call of an exam question or following the local rules in court proceedings. Especially when students go well beyond what my directions call for, they can feel somewhat aggrieved when I point out, for example, that the directions asked for a one-sentence answer but their answer was four sentences, or that the directions asked for the number of elements and their answer named the elements instead. Nevertheless, by continually tying the importance of following directions to exams and practice, the message usually gets through.